Movie Review: Who wants to watch Virus in the middle of a pandemic? 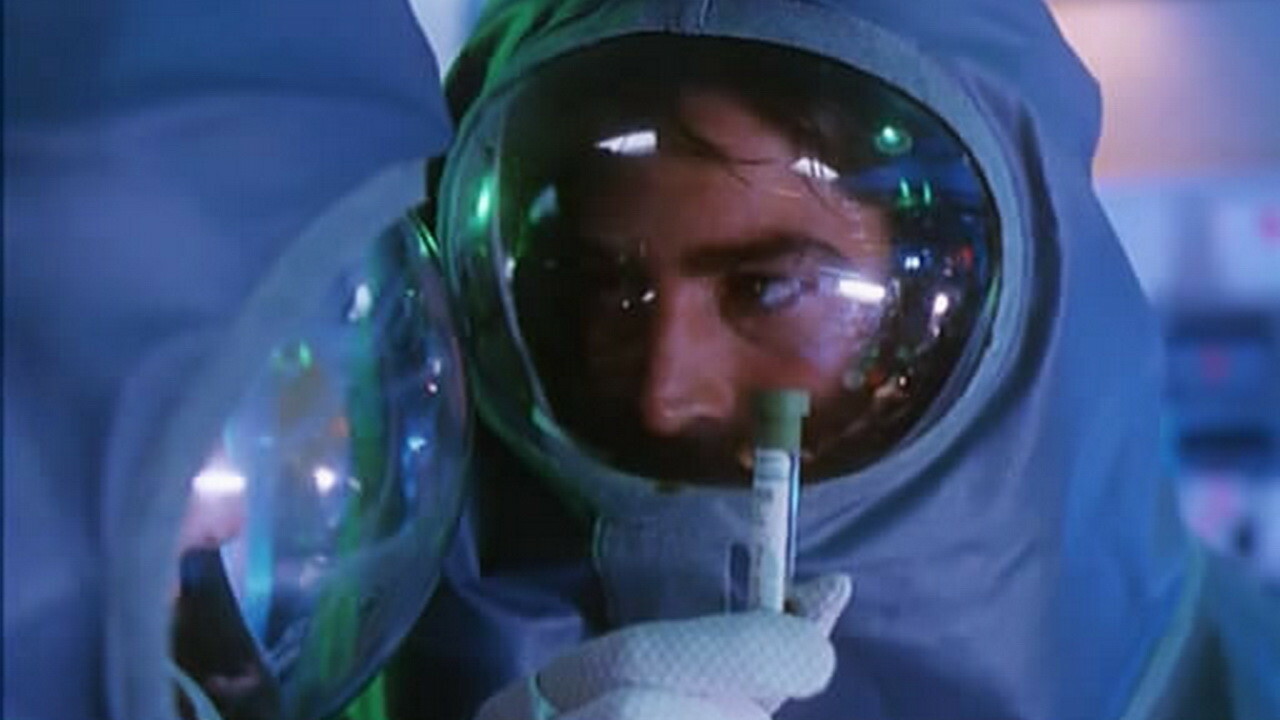 Movies like Virus have been all the rage during the past year as we are all fascinated to see how deadly diseases are portrayed on the big screen and how they compare to what we’re experiencing during the COVID-19 pandemic. And maybe we’re hoping to see a happy ending, not knowing if we’re going to have one in real life.

This 1995 made-for-TV movie is based on the Robin Cook novel Outbreak, but that title was already used that same year for a big-screen movie so this one got the lesser title, Virus. It also goes under the title Formula for Death.

Strictly speaking, it’s not really a science fiction movie, but more of a medical thriller, but it definitely has an X-Files feel to it as it features a young female doctor aided by a former love interest as they try to figure out what’s causing a series of deadly bacterial outbreaks in different American cities.

The film opens with scenes from the jungles of Zaire in 1976 when a sick man stumbles into a clinic by the Ebola River. Hey, that names sounds familiar. Oh, yeah. Ebola. Everyone there dies and we flash forward a couple of decades where we meet our heroine, Dr. Marissa Blumenthal, a newly-minted CDC investigator.

Probably most famous for her stint in the Desperate Housewives TV series, the doctor is ably played by Nicolette Sheridan who has to spend a lot of time proving to her mansplaining superiors that she’s perfectly capable at doing her job despite her blondeness.

Her former boyfriend is played by Stephen Caffrey, an actor I always liked from his days on the Tour of Duty TV show. He’s kind of a nebbish here, but a lot nicer than his ex’s new guy who is creepily played by the very much older (24 years in real life) William Devane. His character also happens to be a higher up in the CDC so that’s not a good look.

Anyway, the movie starts unspooling and we start learning about suspected Ebola outbreaks. The first is in Atlanta, then she gets sent to St. Louis where it looks like there’s another one.

Sheridan starts channelling her best Dana Scully impersonation as she examines bodies that look like shit after Ebola’s done with them. She notices they have some similar cuts and weird round-shaped lesions that seem out of place.

She gets blown off by the doctor in charge in St. Louis because she is young and a woman. He wants the first team, gosh darn it, not the B team!

The mystery deepens when some shadowy figure starts creeping around to see what she’s up to. I half expected the characters to start walking around with their X-Files™ flashlights as they investigated what was up.

So how did Ebola get to the U.S. and how did it nearly simultaneously appear in different cities? When the samples are analyzed from the dead men, we learn they were killed by the same Ebola strain from our dead guy in the opening scenes from 1976, which is impossible because it would have mutated by now.

Things go off the rails when our heroine is accused of releasing the virus and she ends up on the run. Nefarious figures conspire against her discovering the truth, which, as we all know from the X-Files, is out there.

I’m probably not spoiling the movie by telling you that she didn’t do it and when the bad guy is finally exposed, his motivation has to be the most American ever. He wanted to create a medical emergency so terrible that it would discredit the HMOs! For the rest of the world that only knows socialized medicine, those are Health Maintenance Organizations that provide health services for a fixed annual fee.

Virus isn’t the kind of movie I thought it was going to be, but it was still watchable. The performances were TV-level good and the story had enough twists and turns that I didn’t connect the dots until shortly before the big reveal. I did cringe a bit at some of the 1990s tech that instantly dated this film like seeing a fax machine in operation and the heroine making a surreptitious call while hidden in a closet, hoping the bad guy wouldn’t notice the very long cord from the wall phone.

The closing credits remind us that “Scientists think thousands of these viruses wait, hidden in the deep forests throughout the world. They are simply the earth’s defense systems against the most dangerous invaders … Man!”

You can watch the full movie here: