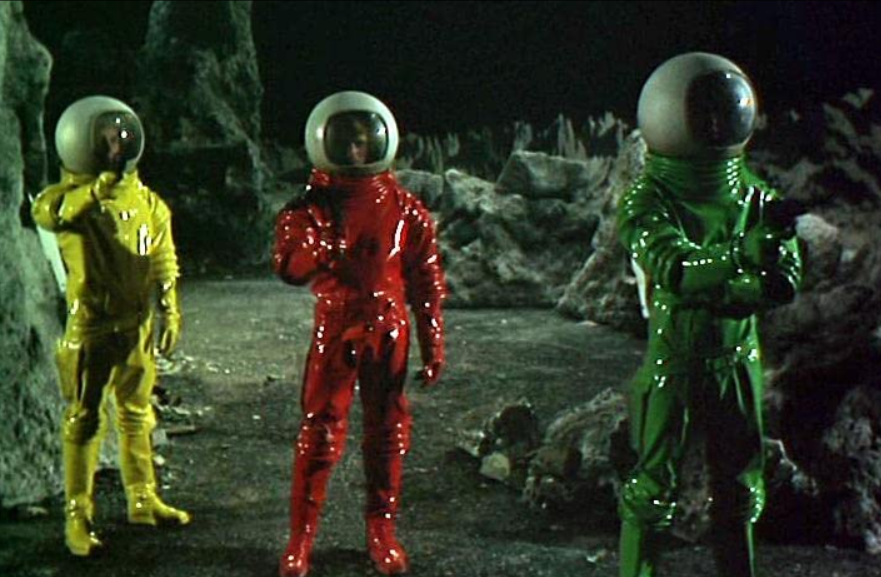 Released just three months after Neil Armstrong was the first man to step on the surface of the moon in 1969, the Hammer movie Moon Zero Two made sure to insert a reference to the historical event with the characters, who were now living in the distant year 2021, visiting a monument erected on the site where the event took place. The sad reality is that we’re one year away from 2021 and while it seemed reasonable 52 years ago that we’d have a colony on the moon by then, the premise seems a lot more far-fetched today. Just more evidence that science fiction is lousy at predicting the future, but great at reflecting the times in which it was written.

Moon Zero Two brings us the 1960s in all of their groovy glory and while it has all the trappings of a science fiction movie designed in that decade, it was actually billed as the first moon “Western” and it’s plain to see that the plot was lifted directly out of a cowboy movie. James Olson, an actor with a respectable if undistinguished career, plays the part of Kemp, a rebellious space ferry pilot who bristles against the growing regulation of life on the moon as he has adventures in his rocket Moon Zero Two. He also happens to also be the first man to have landed on Mars. If this was a Western, he’d be the fastest gun in the West.

He meets Clem, the beautiful sister of a moon prospector who’s staked a claim on the far side, but has gone missing. She’s played by the alluring Catherine Schell, a former Bond girl, who also has acting credits in Doctor Who and Space: 1999. She’s the obligatory love interest that is present in most Westerns.

There’s a loveable sidekick, Hubbard, played by Warren Mitchell who’s genre appearances include The Crawling Eye. and a bad guy who’s campily portrayed by decorated British actor Warren Mitchell who had a long and distinguished career on stage and screen. In a Western, he’d be the guy in the black hat, plus he has henchmen who are the muscle-bound knuckleheads that are there to torment the good guy at appropriate points in the story. Oh, there’s also a sheriff, who happens to be a women because it’s not the 1960s, it’s the future. Her appearances are brief, but spectacular, mostly because of her groovy costumes. Despite the scene-stealing outfits, Adrienne Cori, who has several genre movie credits to her name including A Clockwork Orange, gives us an able performance.

The plot kicks in when the bad guy and his henchmen conspire to crash a sapphire asteroid on Clem’s brother’s mining plot on the far side of the moon, but they need the assistance of Kemp and his Moon Zero Two spaceship. They plan to kill the brother so they can claim-jump his piece of land. Along the way, there are space gunfights, zero-G bar-room brawls, go-go dances by The Gojos and lots of lunar antics. Throughout the film we are reminded that it is set on the moon. For example, Kemp stops off at the moon bar in moon city to buy a drink called the moon flower and pays for it with moon dollars. At one point, the characters are even playing Moonopoly.

A lot of people criticize this movie for wavering between being serious and veering over the edge to make fun of it all. I chose to enjoy it as a campy artifact from the fab 60s that played as a sort of Austin Powers in space. The psychedelic set decoration and futuristic costumes are definitely worth the price of admission. Even the special effects of spaceships and lunar exploration are half decent which is understandable when you realize that this was the most expensive movie that Hammer Films had made up to that time.

The dialogue and plot are cliché and predictable, but there’s enough humour and self-aware performances and goofy dialogue that Moon Zero Two still holds up as an entertaining diversion for science fiction fans who don’t take things too seriously.

You may be familiar with the MST3K version of this film, but be aware that, like most movies it skewers, it’s severely edited to fit the show’s time slot so that truncated version makes even less sense. Treat yourself to the real thing without the snide robots and I think you’ll enjoy this blast off from the past off.

Go back in time with this trip to the future by clicking the link below: