Movie Review: Someone call the exterminator for Invasion of the Bee Girls 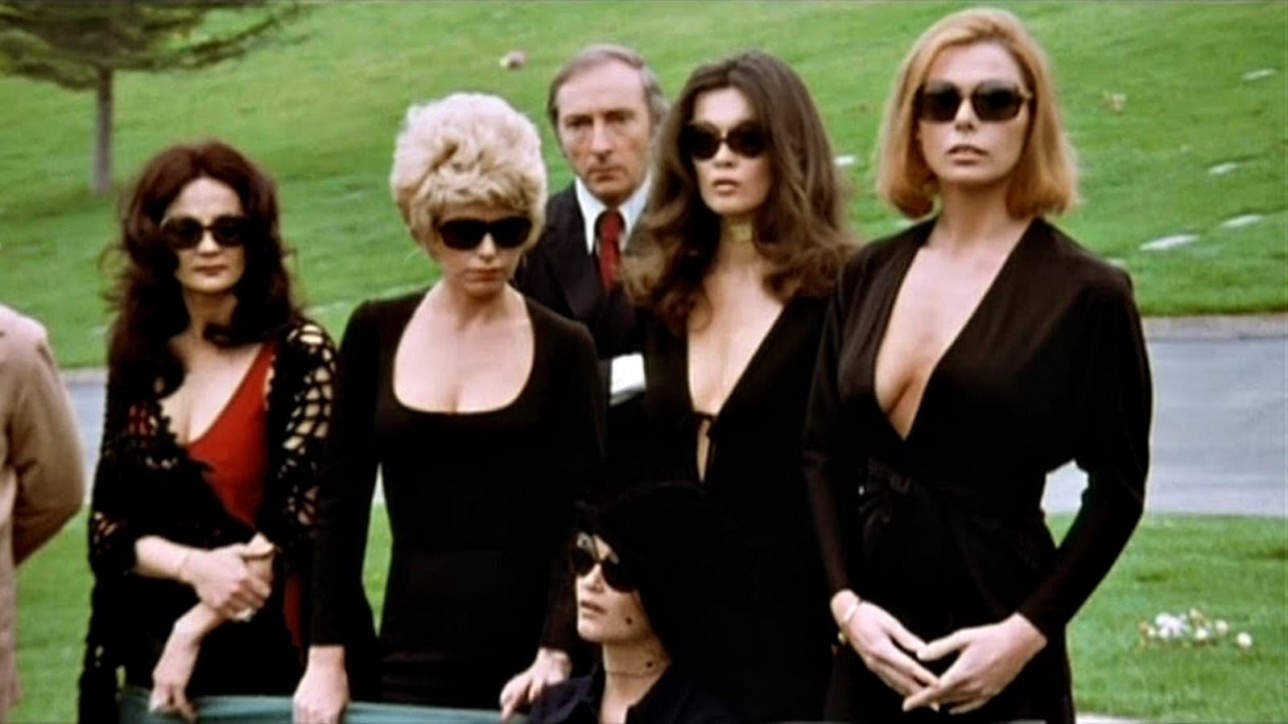 With an infinite supply of pornography available to anyone with an internet connection, the concept of the sexploitation movie these days seems quaint, but in the 1960s and 70s, there was a steady parade of titillating films for the non-discerning movie-goer. Invasion of the Bee Girls is a classic example.

This 1973 movie tells the story of how some cosmic force from the stars is turning women in a small American town into queen bees that sexually exhaust the men they encounter. Judging from the number of breasts exposed in this movie, I think that all of the actresses had a clause in their contracts which required them to bare their mammaries. I believe there were a few exceptions for some of the elderly extras, but I was half expecting them to show their ta-ta’s at some point.

It’s never quite explained what this cosmic force is that is turning the women in this movie into queen bees, but the story, such as it is, centers around a government facility in a remote desert town. It has drawn attention from an investigator at the State Department because a top researcher has been found dead. We learn that he had a heart attack while having sex with his mistress.

The investigator interviews the women, a sexy glasses-wearing librarian who works at the research centre. Naturally, once she doffs her glasses and lets down her hair from its bun, it is revealed that she is a vamp. During the first questioning, she tells our agent “we balled and we balled and we balled until he dropped dead.” His first reaction is to ask her out to lunch the next day which begins a romantic entanglement. Very professional, I know.

As the story spools out, the body count rises and we are treated to various flesh-filled scenes of not-so-attractive, middle-aged men seduced into cheating on their wives by a variety of comely young women, all of whom are wearing dark sunglasses. A clue.

Our investigator, played by the prolific B-actor William Smith, starts zeroing in on the strange goings-on with the help of his new librarian girlfriend who is capably portrayed by Katie Saylor, an actress with a small number of credits to her name such as a The Swinging Barmaids and Supervan. Their romance is cemented when he saves her from being raped by some local rednecks upset that local health authorities have warned the men of the town to abstain from sex because they fear the unexplained deaths are caused by a virulent venereal disease.

We start to get clues that these lethal seductresses aren’t normal when we see that when their dark glasses removed, their eyes are revealed to be completely black. We then get some point-of-view shots that demonstrate that these are compound eyes and they see things like an insect would. Oh yes, one of them is also very fond of eating sugary things. Just dropping clues for our investigator and viewers to figure out that they are indeed actual Bee Girls.

As the investigation continues, we are treated to some more nudity-induced deaths, most of them gratuitous, but some so unrelated to the story that they may have just been inserted to meet some kind of sexy-scene quota required to be labelled as a sexploitation movie. While less spectacular, I did enjoy the overall set design and 1970s-esthetic of the film that let me spot all kind of obsolete technology like computers with punch cards, reel to reel tape recorderss and phone booths. Some of the 70s haircuts and clothing were also pretty cool to look at.

Things come to a head when the top queen bee starts recruiting the wives of the dead men to turn them into bees. The process seems to involve them taking their clothes off in some kind of high-tech laboratory and placing them in an orgasmatron, but not before covering them in goo that turns them into pupae. The helper bees take special care in spreading the goo on the women’s breasts and this excites the other bee girls to the point that they have to expose their own breasts. It’s not clear why that it is, but just roll with it.

One of the women that’s getting the pupae-treatment is the sexy librarian who has been kidnapped by the head Queen Bee. There is a climactic scene where the investigator arrives to shoot up the place. He destroys everything and everybody, although the librarian is miraculously safe from harm.

In the denouement, we learn that the Bee Girls have been exposed to cosmic radiation that renders them sterile which is why they are driven to keep mating with men. Unlike say, actual women. Our investigator hero and his girlfriend end the story with one last roll in the hay, because it wouldn’t be a sexploitation movie if it didn’t begin and end with nudity. And just like 2001: A Space Odyssey, the movie ends with the stirring music of Richard Strauss’ Thus Spoke Zarathustra.  That being about the only point of comparison between the two movies.

Follow this link if you’re ready to watch Invasion of the Bee Girls!

Invasion of the Bee Girls