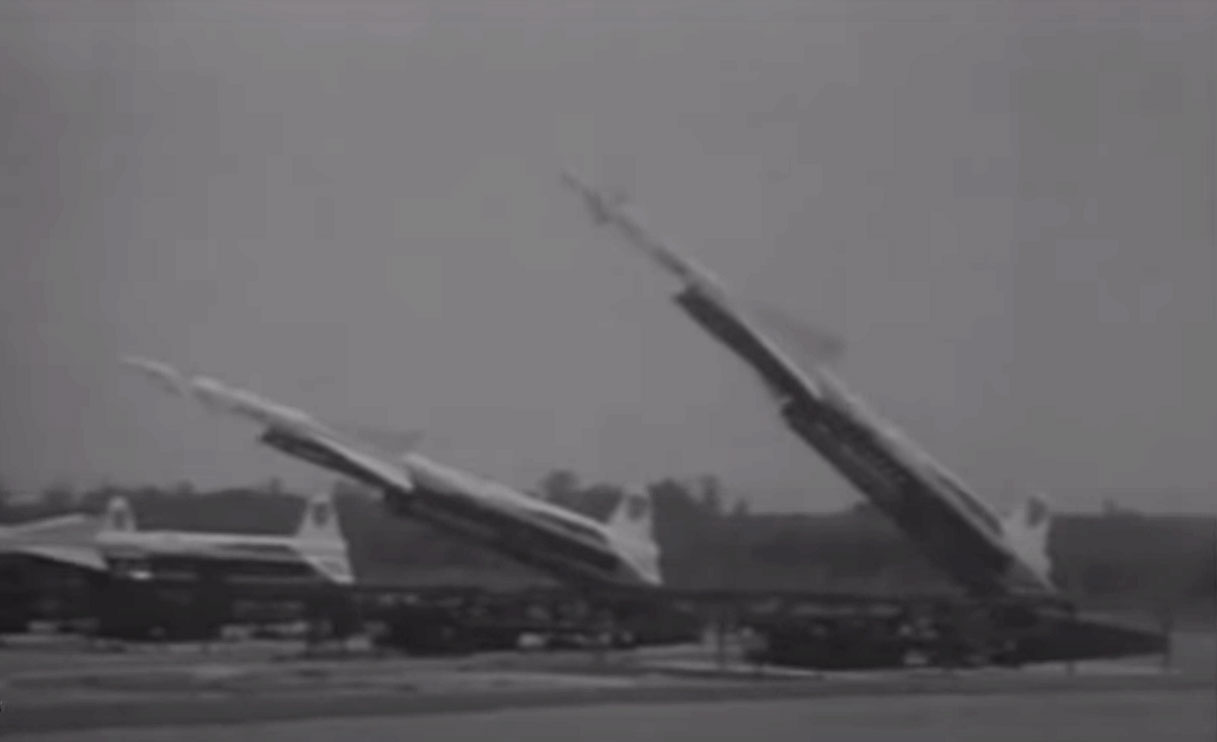 If some movies are known as thrillers, what would be the opposite? A calmer? A borer? Whatever it is, Rocket Attack U.S.A. is anything but thrilling.

For my first review of one of the movies you can watch here on SciFinds, I offer my take on one of the absolute worst pieces of schlock you’ll ever see. Rocket Attack U.S.A. is a thinly-veiled piece of American Cold War propaganda, but one  that is so cinematically inept, that it has garnered something of a cult following.

Told in a sort of faux-documentary style, this film imagines a Soviet plot to hit the United States with a secret missile attack that will unleash nuclear Armageddon. It’s important to put the film into the historical context of 1958. the year it was released. It came out in the wake of Russia’s Sputnik launch when Cold War paranoia had many Americans convinced the tiny satellite was a commie ploy to cover up an intercontinental ballistic missile program designed to destroy America.

The basic plot of the movie follows an American spy, John Manston, who goes to Russia to find out what’s happening. Manston is the last major film appearance of actor John McKay who’s brief three-movie career is probably more notable for his first movie role in Cuban Rebel Girls, a horrible movie that just happened to be the last starring Errol Flynn.

Prior to the mission, we learn that Manston has something of a history of canoodling with foreign operatives so naturally the undercover Russian agent he’s teaming up with is a woman. It’s not long before John and Tanya are both under covers. It’s okay that she’s a bit sleazy since she’s also the mistress of the Soviet defence minister, but that lets her get secrets for America.

Loose women are the specialty of the actress who amateurishly portrays Tanya, Monica Davis. She went on to appear in such 1960s classics as The Road Hustlers, Women of Desire, Sin in the City, 1,000 Shapes of a Female and Unholy Matrimony, where she played the forgettable role of First Swinging Wife.

During her horizontal visits with the Soviet minister, Tanya discovers that Americans aren’t actually paranoid. A Soviet missile attack is imminent and she informs our hero who attempts to take out the launcher before the missile is fired. Spoiler alert. He fails and both are killed. The remainder of the movie leads up to the climactic A-bomb blast that wipes out Manhattan. If only America had an anti-missile system, they would have been saved, which is essentially the moral of the story for the audiences of 1958.

While the secret agents are little more than thinly-drawn caricatures that deliver lines that are more wooden than a picnic table, the film does feature some memorable scenes. I enjoyed the agents’ initial rendezvous in a Moscow nightclub where we get to watch a needlessly long shot of a bikini-clad, belly dancer, but not one that’s lascivious enough to qualify as sexploitation, followed by fire-eating Cossacks. Those were probably the best performances in the movie, but the last moments of a New York City radio announcer dispensing advice to the eight million inhabitants of the city who are about to be vapourized in the next eight minutes are possibly the best with this line: “Cover yourself with wet newspapers and lie until the blast has subsided. Don’t touch or eat anything. Above all, keep calm and follow instructions.”

You could argue that spy thrillers aren’t science fiction, but I’ve always treated them as a sort of alternative history story where you have events happening in another timeline, which is definitely the case here as NYC was obviously never nuked in the 1950s.

As the announcer ominously announces before the credits roll, “Regardless of possible disagreements over conference tables, we cannot let this be THE END!”

Ready to watch Rocket Attack U.S.A.? Click here to give it a try then let us know in the comments what you think about it.