Movie review: Not quite four stars for Four Sided Triangle 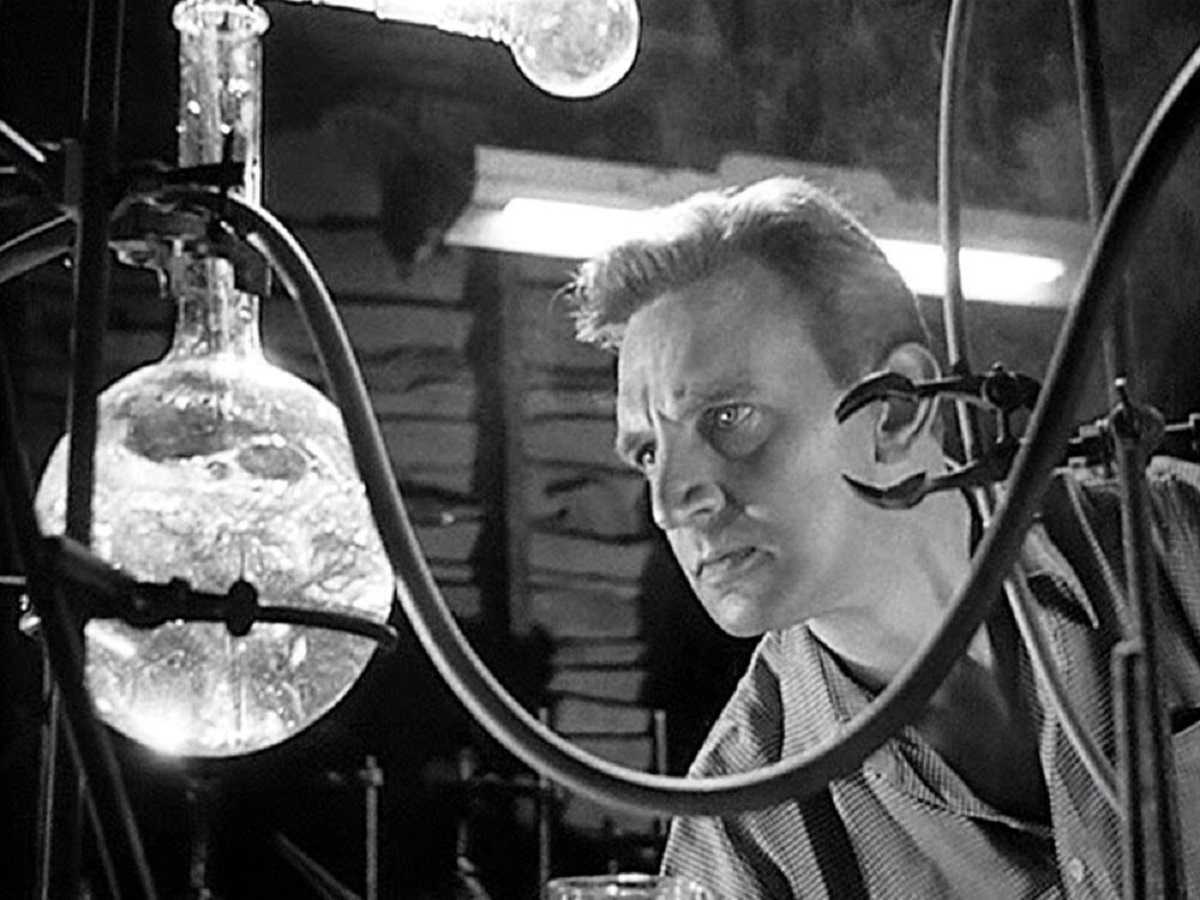 Many of us know what it’s like to be in a love triangle only to find ourselves shunted aside by our love interest when they begin to favour the other person in the trio, but what would happen if you could create an exact duplicate of your object of desire? You’d end up with a four-sided triangle, which is exactly the premise of Four Sided Triangle, an early science fiction movie from the famed British production company Hammer Films.

Based upon a novel by William F. Temple novel, this 1953 movie tells the tale of a trio of childhood friends whose relationship grows messier once they are older. Boyhood buddies Bill (John Van Eyssen) and Robin (Stephen Murray) compete for the attention of the lovely Lena (Barbara Payton) and grow apart, but forget about her when she leaves for America. They go one to excel in school, one of them the son of a rich industrialist and the other raised by the village doctor (James Hayter) after the boy’s parents die. Much of the movie is framed as as flashback being recounted by the doctor and we know from the outset that this story will end badly.

Much of the movie gives us scenes of the boys, now young-men, working on their inventions in a barn filled with lots of impressive laboratory glassware with retorts, coils and assorted paraphernalia. These are meant to lend some scientific credibility to the film, but they mostly just bog things down and judicious editing of these moments would probably let you fit the movie into the time slot of an Outer Limits or Twilight Zone episode, which this movie’s story greatly resembles.

Lena returns from America and lands in the boys’ lives like a bombshell. She soon joins their efforts and acts as their aid, confidant and chief bottle washer. We learn that they are working on a device that will duplicate matter. They demonstrate their invention to the doctor by duplicating his pocket watch and explain that they are creating matter out of energy, but are vague on where that energy comes from or how much they would need to duplicate anything.

Things are going swimmingly as the rich boy’s father decides to underwrite their efforts and call in the government in order to best use this fantastic invention. During a dinner with government officials, one of the lads lets it be known that he’s going to marry Lena. The other is gutted by the news.

He sets out to prove that he can use the device to duplicate living creatures and begins experimenting on rabbits and other creatures.  We get a too-long montage of how he accomplishes that then when Lena returns from London while her husband stays behind, she realizes she has broken the other man’s heart and agrees to his plan to duplicate her and create a sort of twin sister.

There’s another tedious sequence of him duplicating her and names his creation Lena then sets off on a beach holiday with her so she “can get used to him.” We learn that she still has all of her memories up to the day of the duplication and while on holiday, she tries to kill herself. She is still in love with her original husband and can’t bear being a duplicate and fake her love.

The lovelorn scientist realizes his mistake and plans to erase her memories and enlists the original Lena to help, but things go bad, as is hinted at the beginning of the movie. I’ll leave my plot description there in case you want to experience the final twist for yourself.

Frequently, compared to the Frankenstein story with an obsessed scientist trying to play God, the theme of this movie certainly foretold the direction that Hammer Films would take in the years ahead.

The highlight of the film is probably the wonderful Barbara Payton who lights up the screen whenever she appears. Sadly, she didn’t make many films during her brief career as her life descended into a tawdry decline due to a battle with alcohol abuse and bad relationship choices. Steve Murray, who bears a striking resemblance to Liam Neeson, has a sturdy performance as the love-obsessed scientist and the rest of the cast give equally credible performances.

Perhaps too melodramatic at times and dragging things to a crawl with unnecessary laboratory scenes, the movie still offers a more human story than many science fiction movies of that era. It’s definitely of interest to Hammer fans and those who enjoy doomed love stories. If you want to special effects, scary monsters and rocket ships, then it’s definitely not for you.

Curious about Four Sided Triangle? You can watch it here: