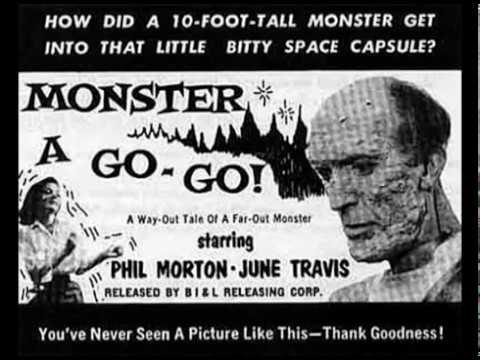 There are many sci-fi movies competing for the title of “worst movie ever.” Depending on who you ask, Plan 9 From Outer Space, Manos: The Hands of Fate or Robot Monster deserve the title, but you could make a good argument that Monster a Go-Go is the worst of them all and it isn’t even close.

To be fair, Monster a Go-Go is completely incomprehensible primarily because it started life as an unfinished film that someone bought the rights to then patched together with some stock footage and narration to inflict the final product that somehow still exists to torment viewers to this day.

In 1961, the original director, Bill Rebane, ran out of money while making the film. A fellow named Herschell Gordon Lewis needed a second movie to show with his own feature, Moonshine Mountain, so bought the film, added a few scenes and dialogue then released it in 1965. For obvious reasons to anyone’s who has seen this turkey, Lewis did not give himself directorial credits in the final cut of the movie.

One of the problems was that he couldn’t assemble all of the original cast, so there are characters that disappear halfway through the film and new ones are introduced to take their places. And one actor had changed his look sufficiently that the new director had to cast him as the brother of one of the original characters.

Possibly the only redeeming item in this film is the groovy theme song played over the opening credits. Here are the lyrics in case you want to sing along:

You can listen to it here. It reminds me of the song Hippie-Hippie Shake:

It’s all downhill from there. Despite the lack of continuity and the jumble of a story, there is a plot, of sorts, to this film, but you have to work hard to follow it. It starts with a space capsule returning to Earth after being in orbit to check on some satellites.

We see some military types on the ground and a helicopter overhead searching for the capsule, but it crashes and we find the dead pilot nearby and the capsule is empty. It’s a mystery!

For a good part of the rest of the movie, we follow a pipe-smoking scientist and the military types as they start investigating a string of murders that seem linked to the missing astronaut. Making life miserable for the viewer is terrible sound mixing and an abundant use of hand-held cameras that induce nausea.

After we’re treated to scenes of a groovy go-go party with some hep kids doing the twist, we see a guy bring his hot girlfriend to a car outside for some heavy petting, but she rebuffs him and the viewer catches the glimpse of some horrible creature. Cut scene to the scientist and the army guy looking at the body of the dead boyfriend.

Thankfully, there is unintentionally hilarious narration between scenes to help us keep track of the story, because it would otherwise be even more incomprehensible than it already is.

The body count rises when we see the scientist walking in a field with a camera in a long, drawn-out scene that was tedious even as I watched it at 1.5x speed. The hideous monster is revealed and he strangles the scientist. I had no doubt in my mind that the monster was, in fact, the missing astronaut which we discover is the case in due time.

There’s more implausible exposition about the scientific explanation of why the bodies are found shrivelled up without blood. An antidote is created, but destroyed by the monster who we now learn is the missing astronaut. The monster is played by Henry Hite, who sometimes goes by the name Height, possibly because he is a towering 7′ 6¾” tall which is a pretty good height for a monster and/or a basketball player.

For many of the actors in this film, Monster a Go-Go represented their first and last appearances on the big screen. Sadly, for June Travis, a secondary actress who reached her heyday in the 1930s, Monster a Go-Go spelled the end of her career. She plays the wife of the missing astronaut/monster who is now the focus of his attention.

Now that the truth is known, the army is called out to destroy astronaut/monster and it’s a race against time to see if they get him before he is reunited with his wife.

The final act of the film is a mish-mash of confusing scenes of how the authorities chase down the monster. I do have to applaud one scene where we see a series of radio listeners listening to an alert to be on the lookout for an escaped radioactive man. In one frame, we see a man reading a magazine called “nudist calendar” who bends over towards the radio in order to hear more clearly and happens to “accidentally” show us the page he’s looking at and we get to see some full frontal female nudity. Nice work.

Soldiers mobilize with their oscilloscopes and Geiger counters. They put on hazmat suits and chase the monster into a sewer, but when they get there, the astronaut/monster is nowhere to be found.

As the searchers exit, they are given a telegram that informs them the astronaut has been rescued in the North Atlantic and is fine and doesn’t know how he became separated from his capsule

“The line between science fiction and science fact is microscopically fine,” the narrator informs us before “The End” flashes on the screen. As for the line between a good and a bad movie, the line is a lot wider, but this one crosses the line between bad and terrible and possibly across another line into whatever is worse than terrible.

Check out Monster a Go-Go for yourself to see if it truly is the worst sci-fi movie of them all:

2 comments on “Movie Review: Monster a Go-Go is doo doo”