Movie Review: Mission Mars is for those who don’t bore easily 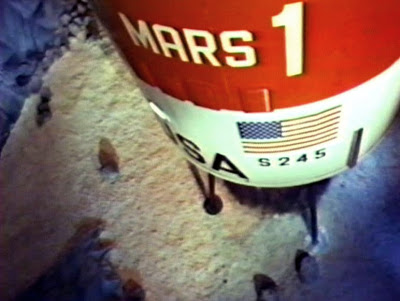 About the only thing that Mission Mars and 2001: A Space Odyssey have in common is they were both science fiction films that came out in 1968. One is a beloved classic of the genre and the other is a forgotten footnote, but one other thing they do have in common is a space mission that culminates in astronauts encountering strange aliens.

While 2001 was directed by famed director Stanley Kubrick, Mission Mars was helmed by Nick Walker, the same man who brought us Santa Claus Conquers the Martians. That should give you an idea of what you’re getting yourself into when you watch the film, but if you keep your expectations low, then it’s not nearly as horrible as you might think.

The premise is that the Americans are sending a trio of astronauts to Mars. They’ll be the first men on the Red Planet as an earlier expedition of Russian cosmonauts disappeared en route. The first 15 minutes of the film introduce the astronauts and their wives, but I knew that when one of them was not married that he’d be the guy to die during the mission which proved to be the case.

The mission commander was played straight by Darren McGavin, well known to genre fans for his turn in the TV show Kolchak: The Night Stalker, but also has many other sci-fi screen appearances including a memorable performance in the TV adaptation of Ray Bradbury’s The Martian Chronicles. His sidekick is another accomplished actor, Nick Adams, who died of an overdose that year.

Special effects in this film are low budget and include lots of NASA stock footage of rocket launches including one of an early Atlas rocket that looked barely big enough to lift three astronauts in orbit let alone get them to a velocity that would carry them all the way to Mars.

As the story rolls along, we get scenes of the crew on their 230-day trip to our neighbouring planet that features a montage of arm-wrestling, haircuts, shaving, pushups, lots of laughs and smiles. This is interspersed with mission control communications and scenes of the worried wives who don’t really contribute anything to the story except for a bit of eye candy.

As this is a trip to Mars, we need the requisite “meteor storm” for a moment of suspense. It looks like they filmed someone throwing rocks at a can, but the spaceship survives and in all of the vastness of space they later encounter the bodies of two dead Russian cosmonauts. One is missing. Did he make it to Mars and bury his dead comrades in space?

Eventually they arrive at Mars, which kind of looks like a tennis ball that’s been covered with splotchy red clay, and then they make a dramatic landing. When they walk on the surface, they are equipped in completely impractical uniforms featuring helmets that only partially cover their face. They explain it away as saying the atmosphere is partially breathablee, but the truth was revealed by the director’s son who was on the set as a gopher:

“When Darren McGavin first donned his helmet, it was a bad fit and mashed his nose, his most prominent facial feature. He angrily ripped it off, threw it against the sound stage wall (it shattered), and stomped off the Mars set, vowing not to return until the problem was rectified,” he said.

“With time being money and money scarce on this ultra low budget film, the films designer — possibly hung over — rushed out and bought and painted some motorcycle helmets. I, as a gopher and the only person on the crew who could type, was ordered to quickly write a few lines of dialogue indicating that the mission crew back on earth had just discovered that there was sufficient oxygen in the Mars atmosphere to permit simplified helmets that only needed to augment the oxygen supply.”

It’s just one of many scientific inconsistencies in the film. Another example is the instantaneous radio communication with Earth. Unless they someone found a way to make radio waves to travel faster than light, it would normally take about 14 minutes for a signal to go one way and another 14 minutes to hear a reply.

Equally improbable is that NASA had to phone the wives in this movie to turn on their TVs when the mission is about to land as if the entire world wouldn’t be glued to their screens during such an event. Remember, this was released during the height of the space race and for anyone old enough to remember the Apollo missions, TV channels offered wall-to-wall coverage of the landings and I wouldn’t think the world would be that jaded about the first landing on another planet.

The movie partially redeems itself when the crew finally gets to Mars. The surface of the planet is credible enough, although it kind of resembles a cheap set from the original Star Trek series. Somehow, they manage to land on a spot on the planet close enough to the missing Russian expedition to find the body of the missing Russian cosmonaut. He appears to be frozen because his heating unit failed, although the Americans somehow walk around the planet in unitards and open helmets without freezing to death. Of course, it turns out that he wasn’t dead and later thaws out.

Finally, this is where the aliens come in and are the best part of the movie as they are not humanoid but resemble a sort of plant with pie plates for hands.  They don’t seem entirely friendly and the astronauts use their machine guns to kill one of them. Not sure if automatic weapons are standard issue for astronauts, but it’s a good thing they had them.

When they try to take off, they realize that the aliens are somehow interfering with their lander. They seem to live in some kind of metal ball, maybe it’s a spaceship. We never really find out, but they conclude that they have to get inside to disable whatever is preventing them from taking off. The astronaut without a wife sacrifices himself by walking inside and we get a glimpse of blinking lights in the interior. He screams, dies and it all explodes and the astronauts are free to blast off. At this point, the cosmonaut, who wasn’t really dead, has thawed out enough to help them leave.

Our brave crew makes it to orbit and communications are re-established with Earth where we learn that the commander’s wife is going to have a baby. The end.

Okay, so that’s a lot of spoilers, but the movie is about as predictable as it comes so I’m probably not spoiling much because chances are you won’t bother watching Mission Mars unless you’re a fan of early space exploration movies. If you are, then it’s worth a cursory watch. If you’re not, then don’t bother.

Willing to try Mission Mars? You can watch it here: