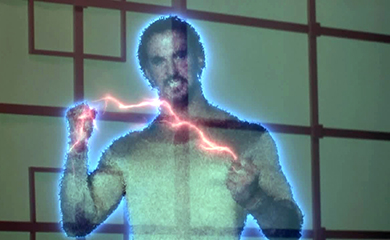 One of the pleasures of bad movies is to simply mock them because they are bad, but some movies are so bad that you can’t even muster the strength to do that. Hologram Man is that level of bad.

While watching this 1995 direct-to-video sci-fi action film at 1.5 speed because I couldn’t bear to waste more minutes of my life watching this than necessary, I wondered if it was written, directed and acted for laughs because it is so ludicrously awful that no one could have been making this thinking they were creating high art.

The basic premise is that the bad guy, Slash Gallagher, is arrested for killing a cop and his consciousness is separated from his body and stored in a computer where his criminal mind will be reprogrammed. During his parole hearing in a future Los Angeles, he appears before the court as a shimmering hologram. Thanks to a hacker friend, his hologram escapes the hearing and runs around the city, wreaking havoc.

The muscle-bound Gallagher is hilariously acted by Evan Lurie, a stuntman/actor who had previously appeared in such vaunted films as Cyborg 3: The Recycler and American Kickboxer 2. His acting is so over the top that there’s no way he wasn’t hamming it up for laughs.

The hero of the film is Decoda, woodenly played by Joe Lara of American Cyborg: Steel Warrior fame. Actually, if you watched the Tarzan TV show in the 90s, you may remember Lara as Tarzan and he must have been getting ready to play that role while making this film because he already wears his hair long. I only mention his hairstyle because Gallagher also has unusually long hair and the dueling ponytails add to the confusion as viewers have a hard time distinguishing the protagonist and antagonist because they resemble each other to a large extent.

There is plenty of action, explosions and shoot-em-ups throughout this film with police and bad guys both being particularly adept at not finding cover and getting themselves killed by gunfire and shrapnel. Given the abundance of pyrotechnics and destroyed cars, this movie had some kind of budget so it makes it all the more puzzling as to the level of badness of the final product. I can only conclude they didn’t budget much for actors and screenwriters, never mind for the director.

I forgot to mention that the cop Gallagher killed early on in the film that got him jailed as a hologram was the partner of the rookie Decoda which is what links the two together and provides the character motivation for our hero to want to defeat the bad buy. During the same incident, Decoda shot Gallagher’s sexy girlfriend so the bad guy is motivated by revenge. At least they were paying some attention to characterization.

Probably the worst casting in the movie was William Sanderson as the hacker who is helping Gallagher. If you ever watched the Newhart show in the 80s, you’ll remember as Larry, the guy who had the two brothers named Darryl. The hacker is supposed to be a super-genius, but he just comes across as Larry the hillbilly. In one brilliant moment of onscreen hacking we see him crack a four-digit password to break into a hyper-secure computer system. I’m sure the password was 1234.

At a certain point, I stopped caring and just wanted it to end. Mercifully, it did when our hero, who somehow also becomes a hologram defeats the bad guy hologram and celebrates his victory with some kind of sexy times with his girlfriend even though he has no corporeal form. I stopped trying to follow the plot at a certain point so if you want to know more and figure out what happened on your own, then click here to watch it, but do so at your own peril: