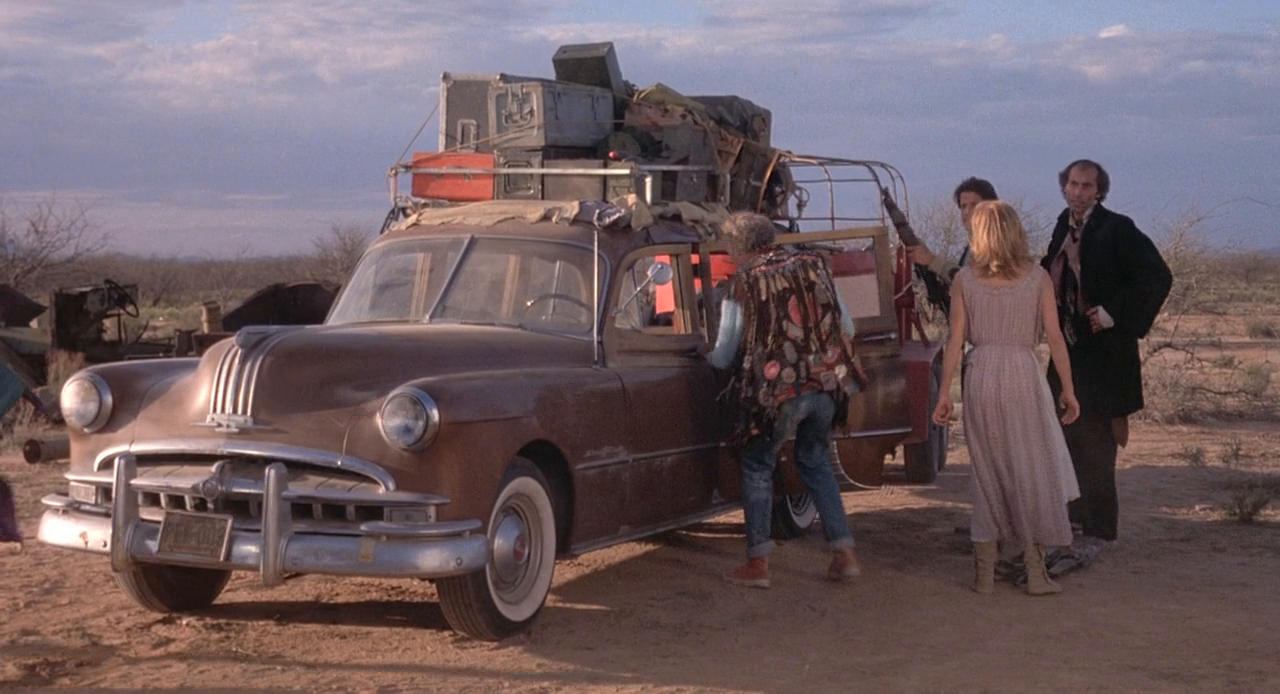 I love the idea of setting The Seven Samurai in the Mad Max universe, and while it seems that World Gone Wild attempts such a fusion, it’s doesn’t quite pull it off.

Even though this 1988 post-apocalyptic movie doesn’t quite live up to either of the aforementioned classics, it is not without redeeming qualities.

Set in the idyllic community of Lost Wells in the Year 2087, it’s been 50 years since a 15-year long world war devastated the globe with nuclear weapons. It hasn’t rained since the war ended so water is a much sought after commodity, but the well in Lost Wells still has water so the inhabitants are well off, which puts it in the sights of some bad guys.

The baddies are some sort of messianic cult led by a sociopathic Adam Ant, of Adam and the Ants musical fame who, it turns out, has a decent list of unremarkable acting credits to his name. When Adam rolls into town in a helicopter being towed by a jeep driven by minions dressed as choir boys, his thugs start shooting the place up, kidnap some children and demand tribute.

They are scared away by the town shaman who is played tongue-in-cheek by celebrated actor Bruce Dern. He comes across as a hippy with a stick, but his amusing quips and stoner demeanour are one of the film’s charms.

The attack on the village sets up the Seven Samurai-esque sequence when Bruce and the local school marm head into a nearby city to recruit one of Bruce’s old buddies to come to Lost Wells to help protect the villagers.

While in the city, there are some set piece scenes that help us imagine the grim world that they live in, but some of it is so ridiculous that it makes early-era Doctor Who episodes look like they are big budget spectaculars. Despite the cheesiness, the aesthetic is consistent and fans of the post-apocalypse will enjoy the effort.

Next up, we get some scenes of Adam Ant preaching to his flock while reading from the book ‘The Wisdom of Charles Manson,’ to reinforce that he is not a nice person.

In the meantime, Bruce and his companions have a run-in with some cannibals, but it turns out one of them is his friend and he’s recruited to join the posse. A few other gunmen come onboard and The Magnificent Seven vibe keeps getting stronger, although I don’t think they ever actually gather seven of them. Maybe they didn’t have the budget.

To help extend the running time of the film, a love relationship between one of the posse and the school teacher develops, but nothing is consummated as Adam Ant and his army of crazies invade the town while riding in on motorcycles.

Fortunately, Bruce Dern’s wise-cracking, druggie sage has organized the town’s defenses and we enjoy a big ambush shoot-’em-up that routs the bad guys, although Adam Ant does manage to escape so that we can have a third act.

As I watched this sequence, I marvelled again at some of the costumes that were on display as someone from the 80s imagined what people might wear in the 21st century. These outfits included a tight-fitting purple leotard, a classic cowboy getup and someone draped in an American flag. Okay, maybe they weren’t that far off, after all.

So everything seems copacetic, until the well runs dry at Lost Wells. Will the hired guns leave town or will they stay to fight for the townspeople? You’ll have to watch it all to find out.

World Gone Wild may not be a classic of the genre, but it is by no means unwatchable and fans of this kind of film will enjoy it as it never takes itself too seriously and delivers enough chuckles and thrills that you’ll find it an enjoyable viewing experience.