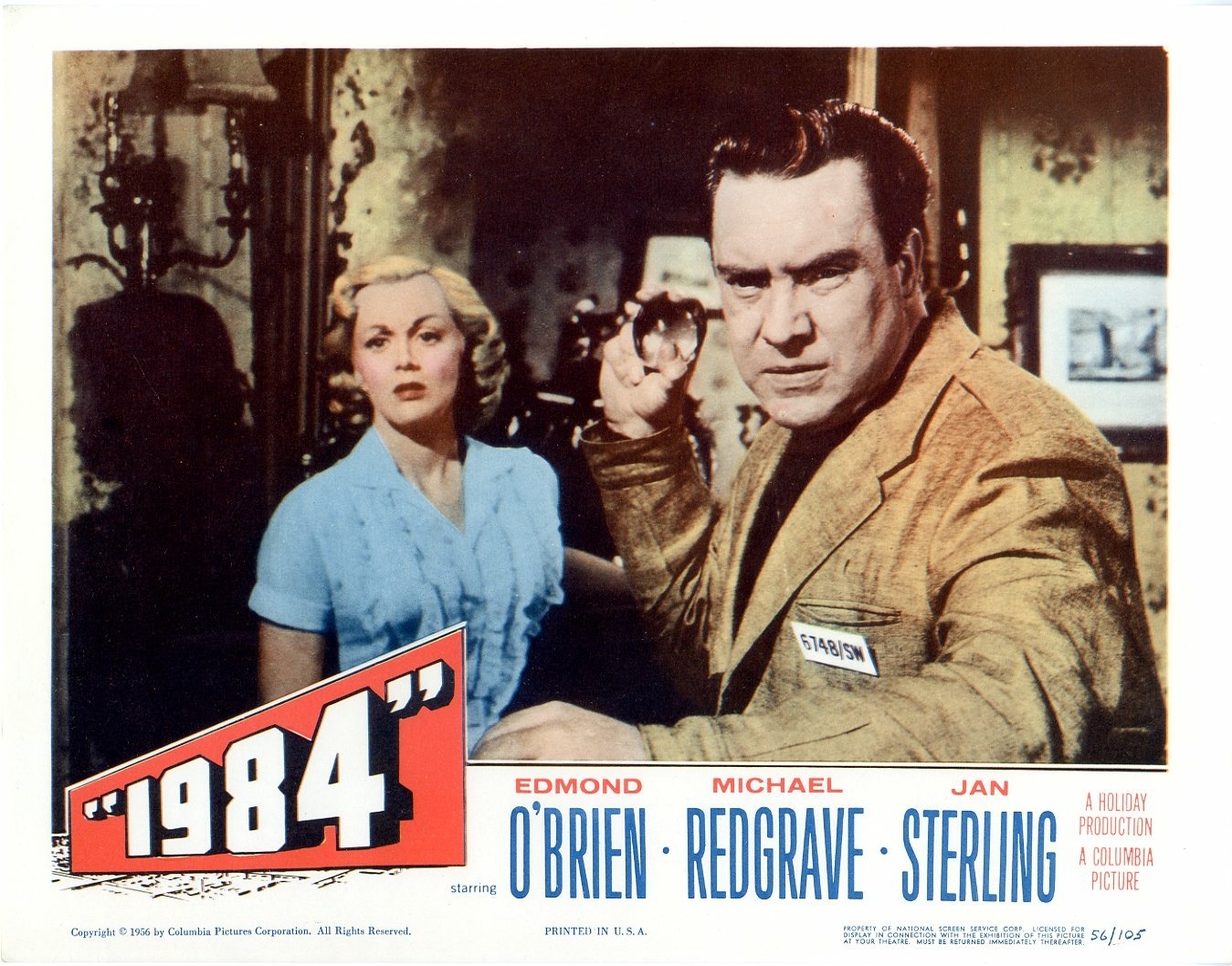 It’s hard not to watch a movie like 1984 and interpret its political message through the lens of the times we live in and our own political leanings.

George Orwell’s 1949 dystopian novel has become synonymous with authoritarianism and was meant to be a warning to its readers to be on the lookout for government overreach. Many terms in the book have become a part of everyday language like Big Brother, doublethink, thoughtcrime and Newspeak. We even use the adjective “Orwellian” to describe nightmarish scenarios where we have lost our freedoms.

The book was originally adapted for the screen as a BBC teleplay starring Peter Cushing, but it’s first theatrical version was this 1956 release starring Edmond O’Brien as the government functionary Winston Smith who works in the Ministry of Truth where he rewrites history or, as his overseer reminds him, where he corrects history. Smith starts to question life in Oceania under the control of Big Brother and proceeds to commit thoughtcrimes that get him into trouble.

If you remember the book from your high school English class, the movie closely follows the plot that sees Smith fall in love with another party member, Julia, played here by Jan Sterling. They pursue their love affair despite it being forbidden by order of the Anti-Sex League, but are unable to escape the all-seeing gaze of the party and are betrayed, imprisoned and reprogrammed to become loyal citizens once again. As the man who arrests them states, “nothing is ever hidden from the thought police!”

Some critics have labelled the romance in this film as vapid, which is true enough, but it’s an essential part of the story. I never feel like the hapless Smith is really in Julia’s league, but love is blind so I chose to accept it and see how their relationship played out.

O’Brien’s stressed-out performance as a man under constant surveillance is believable, but Sterling doesn’t contribute much as Julia. She’s mostly there to look pretty. I liked the side character of Smith’s friend played by Donald Pleasance who, coincidentally, appeared in the BBC teleplay version of the story. However, the best performance of all is by Michael Redgrave who plays O’Connor, the menacing Inner Party member who rehabilitates them with evil pleasure in the Ministry of Love.

There are some great scenes in this movie that are truly memorable like portrayals of the Two-Minute Hate and Hate Week where people at public rallies are worked into a frenzy of shouting and denunciations of Oceania’s enemies. Interestingly, the two-minute hate was a concept that came from the First World War when soldiers would direct a hail of machine gun, rifle and artillery fire for a brief burst towards the enemy trenches as a way of releasing pent-up frustrations.

I also found the portrayal of the Ministry of Truth office as being particularly scary. It was a panopticon with the overlords in the middle of a cylindrical building with all floors and desks visible as the bureaucrats performed their jobs on what could only be described as desktop computers. It was the ultimate open-office concept.

The stark use of black-and-white really adds to the bleakness of this film and the omnipresent two-way TV screens and ubiquitous posters of Big Brother and doublespeak slogans like Freedom is slavery, Ignorance is Strength and War is peace portray a believable future dystopia.

I wouldn’t recommend watching this movie if you’re trying to skip reading the book for school, but it does a decent job of conveying Orwell’s message about life in a world without freedom.