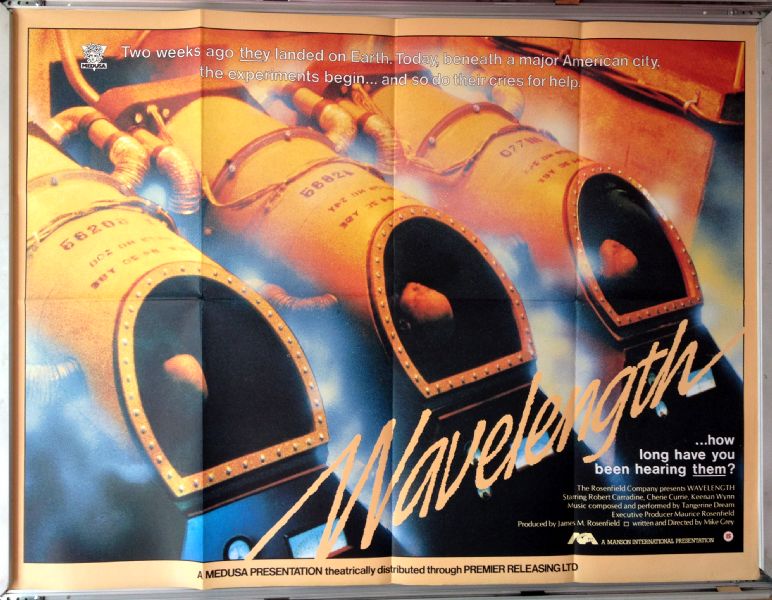 The idea that the U.S. military is hiding evidence of aliens from the public has become so pervasive that it has almost become a piece of modern folklore. The usual story is that a “flying saucer” crashed in Roswell, New Mexico and the military either recovered bodies or actual survivors. The idea of this conspiracy has been perpetuated in countless books, movies and TV shows to the point that a sizable number of people have come to take it as fact.

Wavelength is a film from 1983 that is part of that aliens-are-here mythos and wouldn’t look out of place as an X-Files episode. Instead of FBI agents Fox Mulder and Dana Sculley, Wavelength features a rock singer and his newfound girlfriend as they stumble across a secret army base in the Hollywood Hills where four aliens are imprisoned.

Some UFO enthusiasts have claimed that portions of the movie are based on actual events, but the director and scriptwriter, Mike Gray, has said that he came up with the story on his own one day while driving down the Pacific Coast Highway. Hey, the truth is out there.

The title of the movie comes from the telepathic connection that the aliens have with the musician’s girlfriend, played in affable fashion by Cherie Currie. Her acting credits are scant, but she’s much more well-known as the lead singer of the all-girl rock band, The Runaways, which is kind of ironic because Robert Carradine, the non-musician, gets to play the musician role in the movie.

The pair are aided by a prospector friend who helped dig out the tunnels for the base when it was constructed during the Second World War. The character is played effortlessly by Keenan Wynn, an actor with a long pedigree, in one of his last movie roles.

The pair explore the complex and are ultimately captured by the military who discover that the woman can communicate telepathically with the aliens and use it to their advantage. It comes to light when they start dissecting one of the aliens, thinking it to be dead, and the woman tells them to stop because she can feel the pain, but it’s too late because he dies. Shades of Alien Autopsy.

When we finally meet the aliens, they look like three young boys who are bald and naked. The aliens never show any emotion throughout their scenes on screen and are oddly believable despite not looking very alien.

Eventually, the couple escapes along with the aliens and they head out into the desert, some of the scenes which I am convinced were filmed near the Vasquez Rocks, famous as the backdrop for many films and TV shows, most notoriously for Star Trek fans as the place that Capt. Kirk fought the Gorn.

Many observers say that the plot bears resemblance to E.T., which came out a few years earlier, as it features sympathetic humans trying to protect child-like aliens from the evil military and help them get home. It kind of reminds me of Escape from the Planet of the Apes, which I guess also has a similar plot to E.T.

Wavelength is the kind of movie that you might have rented from the local video store back in the 80s and offers a nice bit of escapist entertainment with its decent acting and competent direction. As an added bonus, it features a soundtrack by German electronica outfit Tangerine Dream. What can be more 80s than that?

2 comments on “Move review: Tune into alien thoughts in Wavelength”